Over a two year period our task is to imagine an innovative concept, research it thoroughly, design it holistically, build it carefully, test it rigorously. Then, disassemble, ship, rebuild, and operate it both as an exacting technical competition and a busy public exhibition space. Only to take it down after two weeks to be shipped and reconstructed at its final site on the Jersey Shore.

RESEARCH: We started with a sustainability and resiliency boot camp that included state of the art building science and technology, climate science and its effect on coastal New Jersey, shore community planning and construction methodologies in the context of storm resilience, and an in depth study of previous Solar Decathlon competition entries.

Learn more about the house itself →.

DESIGN: Since day one we have used a wide variety of tools, from hand sketches to complex computer analyses, to model our ideas from many perspectives simultaneously. For us, a window for example is a balance of form and structure, view and glare, energy source and sink, and a variety of other dynamic forces that can be modeled concurrently. The result is a feedback loop in which design feeds itself.

BUILD: We are building the house ourselves on the Stevens campus through the winter and spring. Some of the unique challenges of the Solar Decathlon manifest here, like building an airtight house that comes apart for shipping.

TEST: The house will be a learning lab next summer as we test our systems to see if they perform as designed and make adjustments as necessary. We plan to simulate the quantitative contests of the full competition.

EXHIBIT: Next fall we will be disassembling the finished SURE HOUSE and shipping it to Irvine, where we will have 8 days to rebuild in the Solar Decathlon Solar Village. We will be competing in 10 contests, five juried and five measured. At the same time, we will be conducting tours for tens of thousands of visitors.

PERMANENT SITE: After the competition, we will take the building apart and ship it back to New Jersey, then start a period of re-design to adjust the building for its final job as an emergency management and coastal resiliency center along the Jersey Shore. 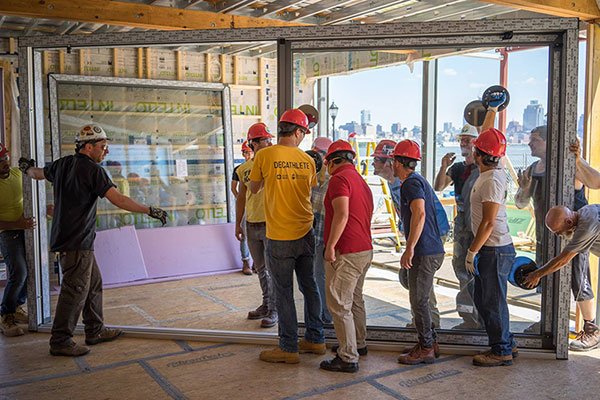 July 11, 2015
Building cabinets and preparing to energize the house.

May 4, 2015
Installing insulation and air barrier to seal SURE HOUSE up.

April 6, 2015
Starting the framing out in the Hudson River parking lot.

March 31, 2015
Building our foundations and preparing to begin framing next week!

March 4, 2015
Finalizing framing plans and mocking up some of the custom elements to the house.

February 18, 2015
Filling in the 'blanks' and getting ready for our March 12th exhibit.

December 19, 2014
Taking a break. Happy Holidays from SURE HOUSE!

December 18, 2014
Submitting renderings and animations to the Department of Energy.

December 11, 2014
Playing with lighting analysis and testing our windows.

Stevens Institute of Technology, The Innovation University®, is a premier, private research university situated in Hoboken, N.J. overlooking the Manhattan skyline. Founded in 1870, technological innovation has been the hallmark and legacy of Stevens’ education and research programs for more than 140 years. Within the university’s three schools and one college, more than 6,300 undergraduate and graduate students collaborate with more than 350 faculty members in an interdisciplinary, student-centric, entrepreneurial environment to advance the frontiers of science and leverage technology to confront global challenges. Stevens is home to four national research centers of excellence, as well as joint research programs focused on critical industries such as healthcare, energy, finance, defense, maritime security, STEM education and coastal sustainability. The university is consistently ranked among the nation’s elite for return on investment for students, career services programs and mid-career salaries of alumni. Stevens is in the midst of a 10-year strategic plan, The Future. Ours to Create., designed to further extend the Stevens legacy to create a forward-looking and far-reaching institution with global impact.

The challenge for the SURE House team is, “Can we design a home for coastal New Jersey that dramatically reduces its energy use while protecting itself from the realities of a changing, more extreme climate?”