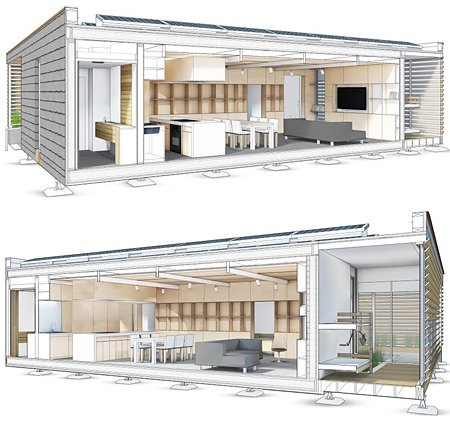 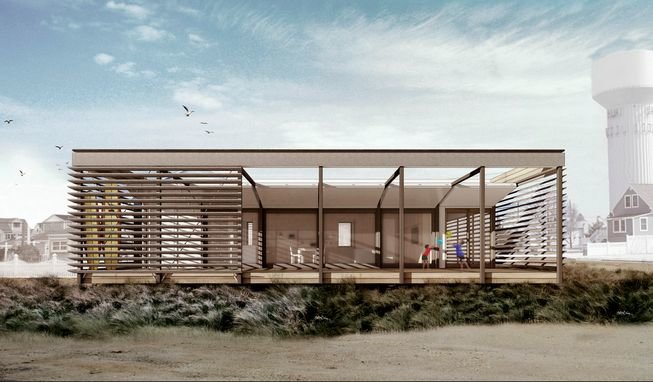 So you’ve equipped your home with roof–top solar modules for energy production. Along comes a severe weather event which disables the power grid infrastructure and prevents your grid-tied solar inverter from doing its job. Now what? The SURE HOUSE team has a novel solution.

This intermittent “down time” problem provided the team with an opportunity – develop an integrated system to provide a domestic hot water solution that is both sustainable and resilient. Our innovative solution hybridizes a photovoltaic electric hot water system and an integrated heat pump hot water heater. Each system alone provides an efficient solution for generating hot water; however, it is the combination of these two systems that creates something unique for the homeowner.

In SURE HOUSE, the primary domestic hot water source is a standalone photovoltaic electric system. This system consists of series of dedicated solar modules that are integrated into the storm shutters located on the southern deck, and a control unit and heating element at the hot water tank. This PV electric hot water system represents a completely independent electrical system replacing a conventional fluid-based solar thermal system.

The price of distributed solar photovoltaic systems dropped by 12-19 percent in 2013, according to a jointly written report from the U.S. Department of Energy (DOE) National Renewable Energy Laboratory (NREL) and Lawrence Berkley National Laboratory (LBNL), and is expected to have dropped another 3-12 percent in 2014 when data is available. As component and installation costs continue to decline, photovoltaic systems become cost-competitive alternatives to solar thermal collectors. The simplicity and durability of a PV electric system also present operation and maintenance advantages that fluid based solar thermal systems do not.

The SURE HOUSE PV Heat Pump Hot Water System is competitively priced when compared to a conventional solar thermal system. However, it offers a higher level of durability, a lower level of maintenance and provides an overall more resilient system for homeowners in coastal communities. Instead of traditional flat plate or evacuated tube solar collectors, susceptible to environmental damage, the PV electric system uses strings of durable and lightweight building-integrated PV. The harvested energy is then transferred in the form of direct current to the PV heater control unit and the heating element. In this system, the PV heater replaces the fluid loop modulating the available direct current through a resistance coil to deliver the maximum heating energy to the domestic hot water tank.

The greatest benefit of this system is that the flow of electricity and energy produced allows you to provide power to your home, even when disconnected from the grid. All you need is sunlight.

However, as fitting as the PV electric hot water system is for coastal communities, what makes the SURE HOUSE model even more desirable is the coupling with a high efficiency heat pump as a secondary source of energy. Generally, when you need to resort to a secondary heat source, the next line of defense is a traditional resistance coil that draws a large amount of electric energy to heat water. Instead, in the SURE HOUSE system, this backup device is a highly efficient heat pump triggered only when the sun cannot provide enough energy to keep the water temperature above a certain set point. The heat pump consists of a loop containing a fluid with a high thermal capacity, giving it the ability to store a great amount of energy. This energy is then easily transferred to the hot water tank due to the high surface area of the loop before it is sent back to the heat pump to be reheated. Even when in heat pump mode, our hot water system will still use 70% less energy than a standard electric hot water heater.

For the SURE HOUSE, the whole is definitely greater than the sum of the parts. Our hybrid heating system offers homeowners peace of mind as they seek an energy solution that is both sustainable and resilient.